A Ninja and a goddess walk into a cave… 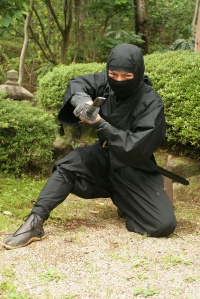 A partner’s earliest job in childbirth was to protect momma from any impending danger, to “protect the cave,” as Patrick Houser of fatherstobe.org says. Dangers would have included enemies or wild animals anxious to prey on a vulnerable mother and her new baby. While today’s cave has moved from the cave to bedrooms, birth centers and hospital rooms, a partner’s job has remained the same and dangers still exist. Today’s dangers include stationary lifestyles and poor nutrition in pregnancy as well as medical systems and procedures which are practiced despite evidence-based research proving them as harmful.

As the cave has evolved and the lines of danger are blurred, protecting the cave has become a more challenging task for dads and partners and many do not understand their role or their duties in the birth space. Not only do dads and partners need to be informed enough about the birth process to help build confidence in momma when she is doing well, but also to help make difficult decisions if complications arise. They are also tasked with maintaining a safe and peaceful space for momma so she can focus on what her body and the baby are telling her to do. This includes allowing in the space those who are nurturing and supportive and keeping out those who are not. As Houser says, “You have nine months to either earn a medical degree or become a ninja warrior.”

So how does one go about creating an intimate environment in the midst of a contraction? This is done the same way intimacy is created when no one is around, by talking and touching. Dads and partners should become very familiar with the following phrases and be prepared to use them between and though the waves of labor; phases like these increase momma’s oxytocin levels and support a healthy birth:

Next, in the middle of a wave, deeply and passionately kiss momma – this will make her oxytocin levels go through the roof. There is a wide conversation on orgasmic birth, yes orgasmic. The same hormones that are released during orgasm happen to be the same hormones released during childbirth. So, dads and partners should be prepared to kiss, hold and touch momma with just as much intention as when the desire is to make love – hold her, rock with  her, dance with her, make her feel like the goddess she is.

With enough patience and love the super-hero troupe of baby, ninja and goddess will ascend from the cave to see the sunshine, ready for their next adventure.